It stands to reason that a store in central Seoul that’s focused on K-Pop groups and their fans was going to be more manic than minimalist, so there are all kinds of screens at the flagship store of Kwangya.

The store was opened by SM Entertainment, which manages and promotes several big K-Pop acts, both male and female. [email protected] was opened as a magnet for fans, and a bricks and mortar space to sell SM artists’ albums and merchandise.

“The store has a futuristic design which recreates the metaverse, where real and virtual worlds coexist,” said the agency. It said that it collaborated with LG Display to create a space inside the store created with clear OLED display panels,” says PR on the opening.

This post goes into the thinking, as well as plans for more stores like this, including one of the works for LA.

The LG component is 33 55-inch transparent OLDS installed facing up (if that wasn’t obvious) from the floor in a lounge area of the store.

LG Display introduced a solution that uses a transparentOrganic Light-Emitting Diode(OLED) as a new concept for display and installed it on the store’s floors. “While displaying albums and idol goods (products offered),” says PR, “it offers a new shopping experience showing various graphic effects and product information like a hologram. This solution can be infinitely expanded to the desired size by connecting transparent OLEDs like a checkerboard. It generates less heat than conventional LEDs, making it suitable for indoor installation. By using special tempered glass, it can safely withstand heavy weight such as actual visitors and other installations.” 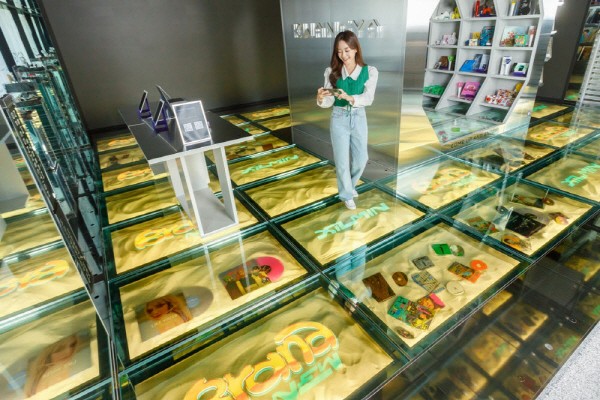 Promoted products are in display spaces immediately below the transparent OLEDs, which results in a quasi-AR overlay effect.

“Based on the infinite scalability of transparent OLED that can be applied to any space desired by customers, we will continue to discover solutions that maximize the utilization of various spaces, such as walls and ceilings, and of course, floors,” says Min-Woo Cho, Head of Commercial Sales & Transparent OLED Biz Division at LG Display.

No idea who supplies the LEDs on the walls.