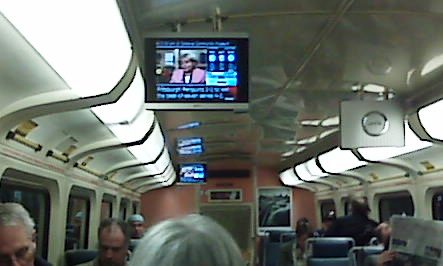 The format has been changed, for the better. But still operating on the faint hope that people will bring radios with them on the train and tune in to 88.1 to hear what everyone else on the train sees as reporters mouthing words and interview subjects mouthing words back.

Shoveling TV news clips to an audience that won’t bother to put on headphones for it is a tough one. 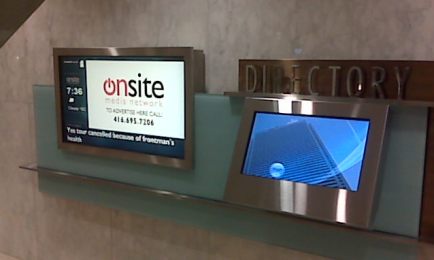 New screens going in this week at Toronto’s First Canadian Place office tower, from Onsite Media Network. Most of the screens are up higher on columns or coming off the ceiling. A nice job on the stainless enclosures but I like how this one is lower and designed in with a wayfinding/directory station. Onsite has also taken over the screen network at Brookfield Place, aka BCE Place.

Dave Haynes is the founder and editor of Sixteen:Nine, an online publication that has followed the digital signage industry for some 14 years. Dave does strategic advisory consulting work for many end-users and vendors, and also writes for many of them. He’s based near Halifax, Nova Scotia, on Canada’s east coast.

Sixteen:Nine has been covering the digital signage and DOOH industries since 2006. Background here

Sixteen:Nine has been covering the digital signage industry daily since Feb. 2006. The online publication is solely owned by Vertical Media Consulting Group Inc., a Canadian-incorporated firm located near Halifax, NS. Other properties include the MeetingRoomSigns.biz online directory.

SIXTEEN:NINE accepts advertising, and has multiple ad positions available. We have a global reader base and large, highly-focused and loyal readership interested in editorial independence, quality writing and a frank, honest point of view. We can send you a media kit with rates and options.

Guest submissions are happily considered from people with genuine experience and insight about the Digital Signage and Digital OOH sectors. If you want to guest post to plug your product, or generate links for SEO reasons, go away.

Scroll back to top